Glad to be back in NYC

Greetings. I’m almost back in my apartment after over two months of renovations. Can’t wait to be cooking on that new stove. But then, that’s not why you’re here. (Also, fwiw, the a/c in the Sound Archives is working again – good for me, good for you, good for the Jews).

I apologize for not writing more often – I thought I might be able to do this from the road, but so far, no…

Therefore, since I’m back, I tried to think of something really special to share. About ten years ago, I cataloged a 1928 Victor disc by Moishele Soorkis, “The Blind Cantor.”

Here is a biography from the jacket of the Collectors Guild lp Cantorial Rarities, on which two of his four known issued cantorial sides appear:

Moishele Soorkis (1900-1974) was born in Uman, now Ukraine. Tragically, he lost his sight through illness when he was only eight weeks old; this was not discovered until he was nearly one. When at age of six the boy showed promise as a singer, his father, Leib Soorkis, a well known synagogue composer and choral conductor, began to keep him at his side during services; thus Moishele learned both chazzanuth and choral song. When he was ten, he became a boy cantor and for three years traveled through Russia on concert tours. In December 1913 he was brought to the United States. Here he spent two years at the Perkins Institute for the Blind in Boston, where he learned to read and write in Braille. At seventeen Moishele accepted the position of cantor in the Rozistzever Synagogue of Philadelphia, serving for two years. Since then, he has officiated only at High Holiday services : ten years in Philadelphia at Rozistzever and Tikvas Israel Synagogues, five years in Chicago, five years in Boston, and one year in New York. His flexible tenor voice has both a lyric and dramatic coloration.

(YIVO houses about a third of the masters for the Collectors Guild label in the papers of its owner, Benedict Stambler. The collection also includes field recordings of various Hasidic dynasties made in Brooklyn around 1960).

So I was curious to read what was on the label: 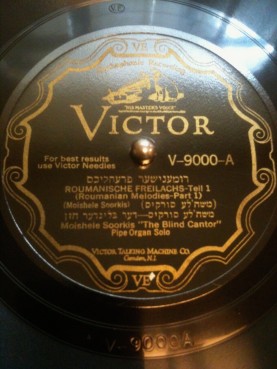 What the bio doesn’t mention is that Cantor Soorkis was also apparently an accomplished klezmer organist. Listen and you’ll here what I mean:

Until next time (and hopefully sooner),

3 Responses to Glad to be back in NYC