Back to Isa Kremer

I was contacted a week ago by Itzik Gottesman, director of the An-sky Jewish Folklore Research Project regarding a song he has posted on the blog The Yiddish Song of the Week (http://yiddishsong.wordpress.com), “Ven ikh volt gehat dem keysers oytsres” (If I had the Emperor’s treasures), specifically regarding a recording of the song by our old friend, Isa Kremer.

Apparently it figured prominently in her repertoire. So, not only did she commit the song to disc, but she did so twice, and published it in her collection Album of Jewish Folk-Songs (The Jewish Life in Song) (Chappel & Co., Ltd., London, New York and Sydney, 1930).

So I thought it might be nice to post her version here. Please do refer to the Yiddish Song of the Week blog for more detailed information on the song itself.

Here is Kremer’s first version, recorded in New York in February 1923 with Kurt Heltzel at the piano.

Here is the second version, recorded circa 1945 with an ensemble led by Yiddish theater composer Alexander (Shura) Olshanetsky.

The first version includes the middle verse mentioned in Itzik’s blog notes, the second doesn’t. Interesting to note the difference in the two performances, 20 years apart – at age 40 and 60, respectively. In addition to a lower key and deeper vocal sound (presumably to accommodate Kremer’s vocal resources in her later years), the 1940s brings a beautiful use of her floated head voice at the end.

Here is the song as it appears in Kremer’s music folio: 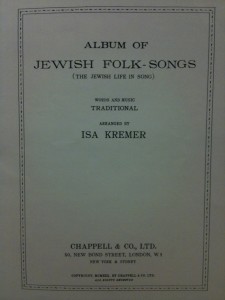 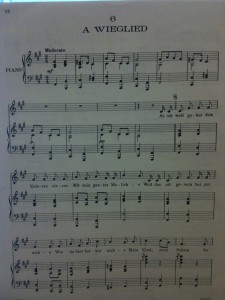 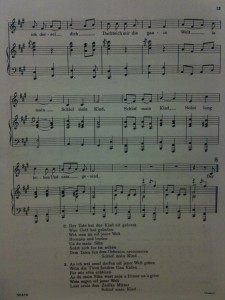 I also thought it might be interesting to show the original lyrics by Mikhl Gordon on which this song is based, as they appeared in his collection Di bord, un dertsu nokh andere sheyne yidishe lider (The Beard and Other Beautiful Yiddish Songs, Zhitomir, 1868). 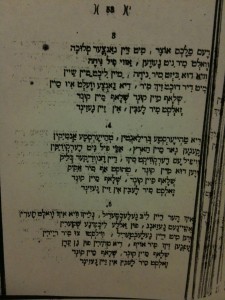 I also cataloged recently a test pressing of an apparently unissued recording of Kremer performing a creepy French song, “Le Petit Navire,” which appears in its entirety in a collection of essays published by Sigmund Freud (!). But that’ll have to wait until next time…

6 Responses to Back to Isa Kremer