This is a slightly expanded version of an article published in the Fall 2011 issue of Yedies, YIVO’s newsletter,  featuring full color scans of artwork and sound clips.

In commemoration of the 95th yortsayt of the beloved Yiddish author and playwright Sholem Aleichem (1859-1916), I’ve selected some vivid period artwork and sound samples of the respective recordings of the writer’s work from which it derives.

First, here is the unique purple label from the test recording made by Sholem Aleichem for the Victor company in 1915 and issued in memoriam, accompanied by the two short excerpts he read for the acoustic horn.

An anonymous colorful depiction of shtetl life decorates the cover of a deluxe 12-inch double 78rpm disc set Tales from the Old Country as told by Howard Da Silva issued by American Decca in 1948.

Actor-director Da Silva, born Howard Silverblatt in Cleveland to Yiddish-speaking parents from Russia, maintained a relationship on stage and record with Sholem Aleichem’s work; he was featured in Arnold Perl’s 1953 dramatization of several stories presented as The World of Sholem Aleichem (the lp jacket features drawings by the renowned artist Ben Shahn) and directed its 1957 sequel Tevya and His Daughters – the catalyst for the hit musical Fiddler on the Roof.

Most striking of all, (visually speaking) perhaps, is spoken word label Caedmon Records’ Menasha Skulnik: Stories of Sholem Aleichem, illustrated by the well-known husband and wife team of Diane and Leo Dillon. 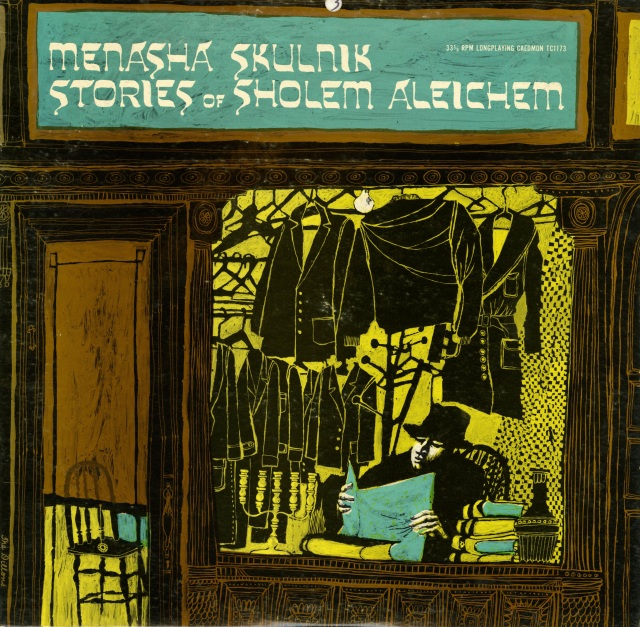 The artwork created for commercial discs was designed for the purpose of selling them to a public familiar with the happy experience of browsing through record store bins. Though those days are sadly a thing of the past, maybe you’ll be inspired by what you’ve seen and heard here to come and give some more of these treasures a look and listen.

The Max and Frieda Weinstein Archives of YIVO Sound Recordings is open to researchers by appointment: (212) 294-6169, lsklamberg@yivo.cjh.org